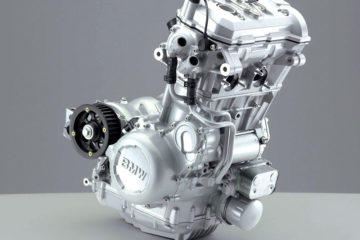 Motorcycle engines are just as diverse as car engines, if not more. The rather small space they’re given meant that engineers had to get crafty and design the most compact engine possible, giving us plenty to choose from. Large, sportsbikes get a four-cylinder inline engine, as they have plenty of room. The upright tourer bikes get a V-shaped engine, as it fits the wide and tall structure of the bike. Scooters get a small one cylinder, because no other engine would fit. For the longest time, Honda’s Africa Twin was powered by, as the name suggests, a V-twin engine. The new one gets a parallel twin, but what does that mean, and what are the differences?

Like every versus, there’s going to be for and against arguments. Both have their pros and cons, so let’s go over them. First off, you need to know what both engines are. The V-twin is basically a V-shaped engine with just two cylinders. It can be mounted longitudinally or transversely, depending on the bike, its size, and the application. The parallel twin is another name for a straight-twin engine, meaning that the cylinders are in line, positioned one behind another.

The main advantage of the parallel twin is its packaging. The V-twin is extremely narrow, but once you add an alternator on one end and a primary drive on the other end, you get quite a long engine. The parallel twin is more than able to match the V-twin in that regard, as there aren’t any space savings with the V-twin anyway. The vertical cylinders positioned next to each other allow the engine to go slightly forwards towards the front wheel, and with no rear cylinder and exhaust pipe occupying space at the rear of the engine compartment, there’s quite a lot of space behind the actual cylinders for all the engine accessories.

Now although parallel twins require a balancer in most cases, it’s really not that big of an issue. Most of the balanced V-twins use a 90-degree V-angle, offset crankpins which aren’t that reliable or twin balance shafts. As they’re bigger in displacement in most cases, the piston-shaking force is much greater than that in the parallel twin.

The Africa Twin parallel twin engine uses two crankpins positioned at 270 degrees, which give the exhaust of the bike syncopation similar to that of the V-twin, with some people even claiming that it adds traction. It’s an ingenious solution from Honda, they managed to change one of their iconic models, and yet, keep it traditional in the process.

As for the sound, it’s personal preference really. The parallel twin does produce noise different from the V-twin, but it certainly isn’t bad. It’s not as distinctive or as unique, but it’s not a deal breaker. There are people who prefer the parallel twin’s exhaust note, and although we don’t mind it, nothing could ever substitute for that glorious V-twin rumble.