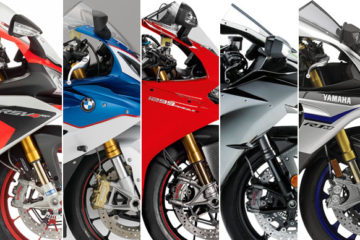 This is probably the most asked question by rookies. Nearly everyone has thought about it prior to getting their first motorcycle. And that’s understandable, we all want to make sure we’re making the best decision before we go out and spend what is possibly thousands of dollars on something important. Your first bike is an important thing, especially as a rider, but not in the way you think it might be.

See, the first bike is all about teaching you how a motorcycle should behave, what it feels like, acting as a learning tool for the first year or so (some cases more). It is true that you can learn how to ride on pretty much anything, however, the learning curve is really different depending on the bike you go for. This topic has been covered probably a million times already, but we thought we’d do an article on our own opinion, based on years and years of experience.

First, let’s talk different types of bikes. You have your grand tourers, sportsbikes, and everything in between. Then there’s the engine size, it can range from anything as low as 150cc or even 50cc, to 1000 cubic centimeters and above. The seating position makes a huge different in how the bike behaves. Sportsbikes have a low, aggressive seating position, which although great for fast driving, isn’t much useful when you’re learning how to ride. A sportsbike is nothing like a scooter or small-cc enduro. You’re basically laying on top of the bike. It’s what surprises the most, the fact that you’re slanted so forward. As you can imagine, rookies will be overwhelmed with the riding position so much that they will be preoccupied to think about actually riding the bike.

A bike with an up-right riding position gives you all the control and visibility needed for learning. You can focus on actually riding, instead of maintaining balance and trying not to kill yourself. Later on, you can move to a sportsbike, or upgrade to a big grand tourer for instance, depending on your personal preference.

The engine is the most important thing however. And it’s not just the engine volume either, it’s more to do with the type of engine rather than its displacement. Most sportsbikes, even the 600cc ones, have an inline four-cylinder. Although they’re generally the most powerful, all their capability lies in the top-end. Or in other words, to get any sort of power, you’ll have to really rev it out. A V-twin on the other hand for instance, delivers lots of power and torque low down, ideal for learning and daily driving. A 1000cc V-twin is better than a 600cc four-cylinder in that regard, not that we recommend starting on a large liter bike however.

Ideally, you want to start on something 500cc or less, and it shouldn’t be an inline four-cylinder. Trust us, you’ll learn so much faster on a smaller bike than a large one. As they say, it’s much more fun to drive a slow bike fast than a fast bike slow. 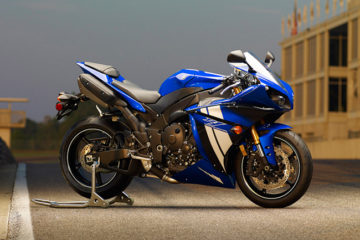 Competition in the one liter Supersports bikes is fiercer than ever. There are dozens of great manufacturers to choose from, and each one makes a few different variations on their flagship bike, whether it be naked or fully faired. Keep in mind, this list is too short to mention even a quarter of them, but we’ve included what we feel like are the best at the moment.

The Yamaha R1 is one of the most popular choices when it comes to this category. And it isn’t really difficult to see why. It’s one of the few bikes to feature an inline four-cylinder engine with a crossplane crankshaft, and it arguably makes the most unique noise out of the bunch. Then there’s the design. It’s the classic sportsbike design. It isn’t as gorgeous as the Italians, nor is it as aggressive as some of the others, but it is undeniably the iconic sportsbike.

The Gixxer appeals to riders who like to attack corners at full speed. The bike is relatively light at 447 lbs, but with 182 horsepower originating from its four-stroke inline four engine, it has no trouble with straight line speed too. It may be a bit behind in terms of design, but if you’re not that worried about the relatively simple design, it’s definitely a top contender in performance terms. It’s quite affordable too.

Kawasaki’s entry in the one liter sportsbike is the ZX-10R. It’s one of the most technologically advanced bikes in the world at the moment, and it’s completely track focused even in stock form. With adjustable shocks, an Ohlins electronic steering damper, a slipper clutch, adjustable traction control and a titanium exhaust, it’s ready to hit the track as soon as you are. It’s not a stranger to everyday riding however. It’s just as easy to ride on the street as any other bike. You do have to treat it some respect, but it will more than return the favor.

Every list has to have a Honda in it, doesn’t it? The Honda doesn’t have a category in which it’s best at, but rather, it excels in everything. It’s the perfect all-rounder. It’s affordable, delivers amazing power, handles great, and then there’s Honda’s immaculate reliability history. It’s got one of the best shock suspensions from the factory too. It’s perfect for road riding, but you can adjust it so that it suits the track too.

The only bike in this list that isn’t Japanese. We could have included the Italians for more diversity, but we feel the Japanese outdo them by just a bit. The BMW then, where do we begin? Well, how does nearly 200 hp and just 440 lbs sound like? Exciting? It’s got Dynamic Traction, Dynamic Damping Control, ABS, Gear Shift Assist and even Launch Control. It will obliterate any track and any road, provided you know how to ride it. Surprisingly, you don’t have to be a good rider to ride it normally. You can turn the traction control up and just cruise. It’s truly the best bike at the moment.